Some of the information recorded within People Inc. is generated automatically by the system using logic defined within the screens. For example, the system takes an employee’s surname and adds it to their first name to provide a format of name that can be used in reports and letters (this calculated version of their name is saved separately in the employee record).

The Recalculate Data Screen wizard is designed to enable the user to recalculate information within the system globally, screen by screen. 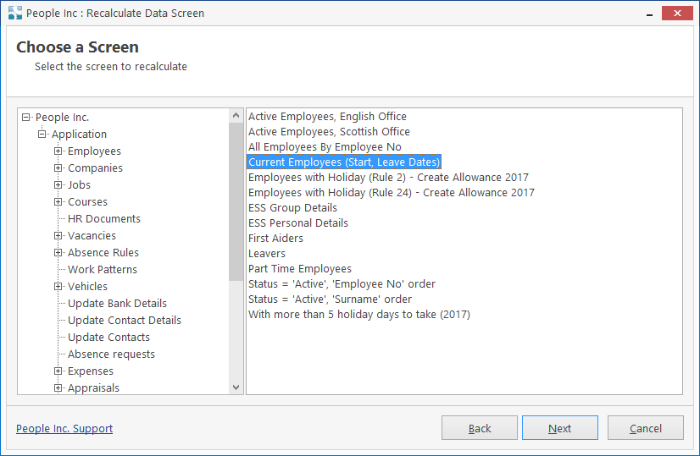 The Recalculate Data Screen wizard can be used to recalculate the records managed by a specific data screen. When this is done, the wizard takes each record one-by-on and runs all of the triggers defined within the screen (and in doing so, it refreshes all of the calculated information). The wizard also enables the user to select a screen filter. This will limit the records that are to be re-calculated in some way. For example, the user may wish to select just current employees (excluding any leavers).

Being able to recalculate data in this way is likely to be of use in a number of situations:

It is possible to define calculations that are only run when a new record is added (or when a record is deleted). These calculations are ignored by the Recalculate Data Screen wizard.

Getting a Copy of the Wizard

The new wizard is available as a download, free of charge to all People Inc. users. Note that to do this, a log-in for the Client Resources area of the website is required.

Receive regular product updates by subscribing to our newsletter.

HAVE YOU FOUND YOUR HR SOLUTIONS?